This afternoon I was passed an article in PC Pro: 'Profile: Lingvist.  We meet the Hadron-Collider scientist whose app can teach you French, Spanish or Russina in record time.'

How could I resist not logging on immediately?  I did so, and 90 minutes later, here I am sharing my experience in case anyone is interested.

My conclusion is that it is a wonderful app, especially suited to reasonably intelligent learners who can spell, and who appreciate or need to learn the real language heard, spoken, read and written in the 'real world'. I will be trying it out next week with some of my older learners, and I recommend it without reservation to sixth form and university students or to eachers who may want to 'up-skill' themselves, whether in their specialist or supplementary language.  Or it may suit people who just enjoy solving clues.

If you’re interested, I am now on level 48 of 51, having made deliberate mistakes to test the app (not that I'm competitive, you understand …!).  Many of the words are not ones which I learnt at university where I studied mainly 17th century - 20th century literature.  The PC Pro article talks about learning language from 'movie talk', and I certainly recognised many expressions from a range of scenarios.  I personally try to maintain my skills via watching France 3, especially the soap opera 'Plus Belle La Vie' and cooking programmes.  (I don’t cook - I just like watching the clear French and the rapport between the hosts).

Why do I like it so much?
EASY TO USE
• It is very easy to log in and create an account
• It is very intuitive.  You can work out quickly what to do whether on PC or smartphone (but there appear to be more functions on the mobile e.g. telling you which words to revise).

ACCURATE
• The machine pronunciation is accurate,  e.g. 'mars' was correctly pronounced sounding the 's' at the end of the word
• I only spotted one very minor omission (not an error) in translation where a word was missed out .. and there is a way of signalling this to the developers.
• It is not fussy about capital letters or accents. You are not penalised for missing them out.  (I realise this may not suit everyone's purpose).
• I note that the default is the masculine when translating first person sentences - but I can see that it would be tricky to change this

SOUND PEDAGOGY
• It teaches language in a context: you work through 'cards' where you have to supply the translation of a specific word which will then fit in a target language sentence.
• You are given useful 'clues' as to the word required: exact number of letters, synonyms for the words needed which may well be cognates
• There are no 'short cuts' to avoid learning: If you fail or make a mistake, you are given the answer and you have to type it in before you can proceed; if you do not turn off the sound, you have to listen to the whole sentence read aloud before being allowed to proceed [This is the part which will put off some more impatient learners!]
• If a verbal error is made, a grammar window automatically opens to show the conjugation of the verb.
• If you are 'nearly there' the program seems to recognise this, and highlights in red the letters missing from your attempts
• You feel a sense of achievement as you go through the levels.  (Though when I used my PC I was not aware of this ..)

TIPS:
• You can get through it much quicker with Swype set to French and audio muted.
• Show the translation at all times to improve translation skills.

I look forward to trying this out with a language I do not know.  I will be interested to see how it meets the claim to adapt the learning programme to my individual needs by taking account of what I can do in French.
I could understand if this product were to become monetised, but it would be great if, like Duolingo, there were a way of keeping it free!

Thanks to Mait Müntel for this innovative product! 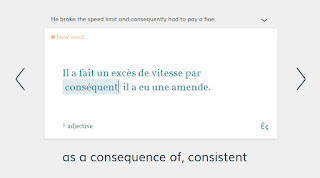 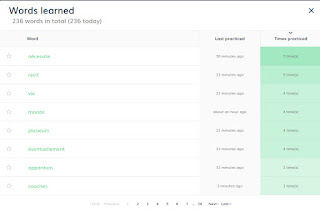 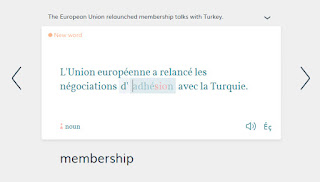 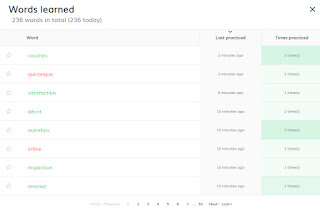 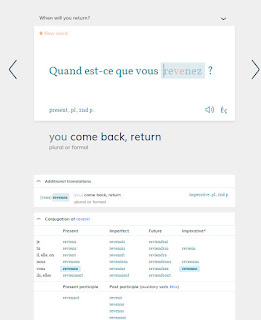