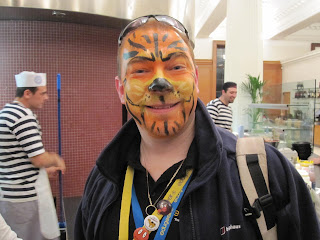 I very much enjoyed the short time I spent at BETT this year. Met up with old friends e.g.

...but also looked at some new stuff which I'll be passing on to others at school e.g.


The highlight was Teachmeet. Well done to the organisers who engendered such a fun, comfortable atmosphere as well as ensuring an efficiently run event; congratulations to all the presenters who provided a great spread of ideas; commiserations to those who were psyched up to present but were not picked by the random fruit machine, and greetings to the many people I met and talked with around the tables and while eating pizza afterwards. A special 'Goddag' to my new Danish friends who had spent the day with me and Joe Dale at The Ashcombe School on Thursday.

The machine chose me to be the first one to do a 2-minute nano presentation. I talked about some lessons I have recently done with Year 10, when I 'mediated' their interaction with real French people in Secondlife. My talk is from 45:22 - 47:39 here (thanks to Leon Cynch for capturing this) (and grateful thanks to Johh Davitt, the camel thrower, for sparing me despite 17 second overrun ...!!) and the short slide show which should have been showing as I spoke is here (thanks to Ian for persevering with the link and getting some of the photos to show, and to Alan for telling me about Twitter fileshare in the morning). The lesson plans are here in the SLExperiments pb wiki. I regret that I did not give a public MERCI to CathyChou Bea and the wonderful people at Arcachon (including Tupper Weir .. DevLink Garside .. Eve Kazan .. Janis Allen) whose dedicated work and love for their island has made this possible.

I have uploaded pictures taken at BETT here on my flickrstream, and added them to the group here. I'd love people to add captions so that I can get to know more names!
Posted by Helen Myers at 20:03